There is a point in every painting where I must remind myself to keep faith.

There is a point, generally right before everything pulls itself together, where it looks like it is actually never going to pull itself together. That it’s a dud. A disaster. A waste of time and art supplies.

It’s that midpoint on any journey where you’ve stepped into that space between your plans and the reality of your plans.

I’m sure you know that place well. The beginning of any journey proceeds somewhat as you expect it – the first few steps are almost always predictable. Do A, then B, and then C. Things are ticking along as you expected and you think, “Yes! I know where this is going. I know what I’m doing. This is all going according to plan.”

And then suddenly you hit Step R, and you can’t really understand how you got there of all places, but you keep ticking along and implementing the plan, and you tell yourself that it’s okay, it’s all still mostly going according to plan.

But then a few steps later, you’re back at Step F, and then you leapfrog forward to Step M, and then you’re all, “WHAT IS GOING ON.” 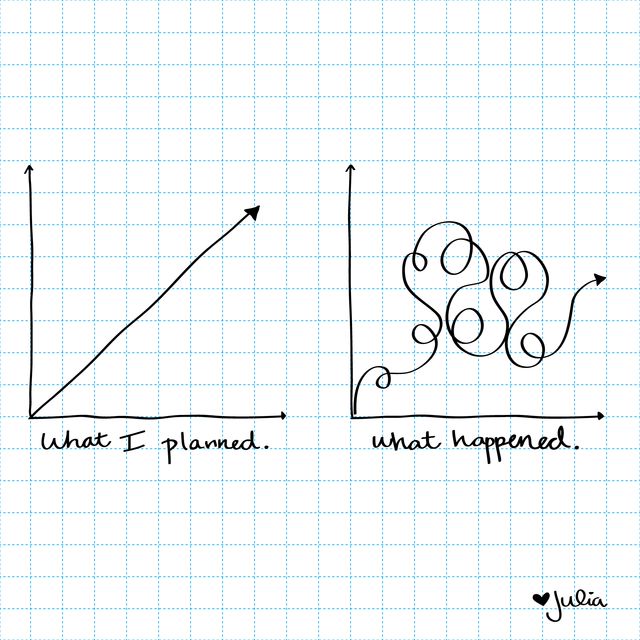 Because when you imagine something, whether it’s a painting or a literal journey or a major life change, you’re imagining something new into existence. So you can really only predict the very beginning, because after a point, it’s all unexplored territory. It will look nothing like what you planned it to look like.

That space in a painting feels disastrous.

And I always have to remind myself that I must keep faith. That my vision is stronger than that chaos I’m feeling. That just because I don’t recognize the location, doesn’t mean it isn’t exactly the right location; that my painting needs to be here, whether I planned for it or not.

That everything is going to be alright.

Because I can really only guess at the journey that my painting needs to take to be completed. And once it veers off the path I’ve chosen for it, everything tends to feel wrong and disastrous and unrecognizable.

The key to surviving that Wasteland of Doom (I gave it a cute nickname) is to never make rash decisions based on my own feelings of Doom. No sudden repainting of whole sections, no abandoning it midway, no judgments on my own worth as a painter.

I just put my head down and keep working the plan. (With occasional wailings about the dooom. I’m only human.) Sure, I only half recognize the plan at this point, but it’s all I’ve got, and just because I couldn’t predict the results of the plan doesn’t mean that the plan was bad. I was just playing psychic (as we all do) when I’m really, really not one.

And so I keep faith. And I keep working. I use what I do know to keep moving forward. And without fail, a few hours later, nothing is looking quite so dire. I can see glimmers of the end of the painting shimmering in the distance.

And that’s when I remember and know, “Ah yes. Every little thing actually is going to be alright.”

(This was first published in my newsletter, which you can sign up for here!)